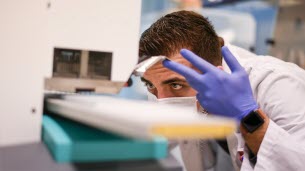 “We are starting to increase the circulation of variants, but it is not explosive, it is linear and continuous,” said Professor Bruno Lina, director of the Respiratory Infection Reference Center, this Wednesday at the opportunity to visit a screening center in the Duchère district of Lyon 9th District.

The variants represent around 14% of the SARS-CoV-2 viruses currently circulating in France, according to the results of the second flash study, announced Professor Lina, a virologist at Hospices Civils de Lyon, who is piloting these studies to calculate the presence of variants on French territory.

A circulation that is not homogeneous

The consolidated results of the first flash survey, conducted on 7 and 8 January, showed a traffic level of around 3%. The second study was conducted on 26 and 27 January on positive RT-PCR tests.

The first results of this second study show that the circulation of varieties is not homogeneous in the territory.

Thus, the Auvergne Rhône-Alpes region is below the national average by around 10% of variants, while Ile-de-France has a strong circulation of around 15 to 20%, according to the statements of Professor Rémi Salomon, President of the Medical Commission for Public Assistance Hospitals in Paris, Tuesday at BFM.

The English variant “over 90%”

It now remains to sequence a thousand SARS-CoV-2 from the positive samples on 26 and 27 January to determine more precisely the proportion of each of the three variants, English, South African and Brazilian.

“They are all three in French territory, but the English variant must represent more than 90% of the variants present,” said Professor Lina. Part of the sequencing takes place at CNR in Lyon, where the first English variant was isolated on 25 December.