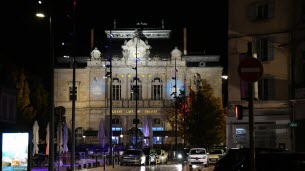 Do we have to delimit to avoid a third wave? The curfew advanced to 6 p.m., will that be enough to stem the Covid-19 epidemic? The next few weeks should be crucial.

Among our five departments, Jura is the only one to experience the advanced curfew since 2 January. And it seems that the measure has not helped to limit the epidemic. At least not in fourteen days.

Hospital admissions: unheard of in the Jura

As proof, two weeks after the measure came into force, the number of hospital admissions for Covid-19 has never been so high in the ward. This unique peak was reached on 15 January when 284 people with Covid-19 were taken care of at Jura Hospital. Unheard of since the appearance of the new coronavirus in our territory.

Since then, it seems that the curve has begun to decline, but be careful! The number of hospital admissions actually fell last Saturday (36 people fewer in 24 hours). We must therefore wait to know whether this reduction is sustainable or not.

In the Haute-Loire we hold our breath. The number of hospital admissions due to Covid-19 is struggling to reduce. The ward, which peaked in mid-November with more than 240 people hospitalized, sees that this indicator continues to increase (+27 in the last two weeks).

We see the same scenario repeated in the Loire, where the curve also rises again with another ten admissions in one week, but also in the Rhône. While on January 13, the number had finally dropped below 900, it lasted only 24 hours. The next day, the Rhône ward had again admitted 905 people to hospital for Covid-19.

In Ain, although it continues to decline slowly, the number of hospital admissions is still high. Especially since the latest data from the ward is bad: 31 people with Covid-19 have been hospitalized in the last 24 hours in the ward.

Still very high in the Jurassic, where there are more than 300 cases of Covid-19 per 100,000 inhabitants, the incidence began to decline just a week ago. And a very slow decline since the speed is still as high as during the holidays.

Specifically, we can therefore say that the effect of the advanced curfew on the viral circulation of Covid-19 is not immediate.

This week, the incidence could therefore continue to rise in our other departments, which saw the curve turn from the last week in December. With a more pronounced concern in the Haute-Loire and Loire where the incidence reaches 240 and 226 positive cases of Covid-19 per 100,000 inhabitants, respectively.

Covid-19 continues to mourn our departments

The only identifiable “good news” in the Jura since the advanced curfew has fallen in Covid-19 mortality. In comparison, the department had about thirty weekly deaths a week before the measure came into force. A sad figure that has since been halved.

In comparison, in the neighboring ministry Ain, affected by the hardening of the measure for only two days, we notice the opposite effect. The death toll from Covid-19 has doubled in one week. There were 24 deaths last week compared to 12 the week before.

However, this indicator may not be directly related to the advanced curfew. In the Loire, for example, the number of weekly deaths is falling. While we regret thirty deaths per week at the end of December, there have been on average more than fifteen since the New Year.

Finally, in the Rhône, mortality remains high. Since the beginning of December, there have been around 60 weekly deaths caused by Covid-19. However, about a hundred were apologized for during the peak in mid-November.

If the advanced curfew prevents the closure of the French economy, it is unlikely that it alone will limit the epidemic. In any case, the measure has not shown immediate effectiveness in Jura, a department that is seriously affected by Covid-19.

And the appearance of the British variant, much more contagious, in our territory does not help. According to Inserm, a new peak in hospital admissions is expected between mid-February and early April.

To predict this third wave, the government could logically lean towards a re-inclusion. Probably inevitable in the spring.