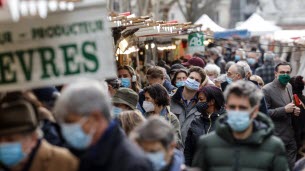 Ready to limit yourself?

According to an Ifop poll for Le Journal du Dimanche, almost 60% of French people would be in favor of a third inclusion in the face of the tense health context. However, they would not approve the closure of schools or food businesses.

In the details of this survey: 24% of the respondents are very favorable for inclusion, and 36% quite favorable, against 23% quite unfavorable and 17% not at all favorable.

A possible ban on travel between departments (56% against 44%) and continued closure of all cultural sites (53% against 47%) also gives majority approval.

Overall, only 36% of respondents say they trust the government to deal with the consequences of the health crisis, compared to 64% who do not trust it.