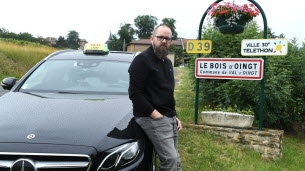 During the first lock-in, self-employed, self-employed and very small businesses (VSE) in financial difficulties could benefit from a monthly grant of € 1500, – financed by the National Solidarity Fund (FSN). The Métropole de Lyon, led by David Kimelfeld at the time, wanted to supplement this first aid with a payment of € 1,000 for the months of March, April and May 2020.

More than 300 artisan taxis involved in 1600 of the territory

One of the conditions required was to be located in the metropolis of Lyon. However, many artisan taxis have their professional home where they have their private home outside Lyon while carrying out their activity on the territory of Metropolis. An activity that is easy to prove since they work under a metropolitan taxi license, which corresponds to their authorized customer care zone.

In total, more than 300 of them could therefore not have benefited from this support. Announced by a complainant who confided his anger to Progress in November last year, Maître François Guillaud from the firm SKOV Avocats decided to start a collective action.

– This is harmful discrimination and a violation of characterized equal treatment, the lawyer says.

Registrations are open until February 15, 2021. To start this action, you will need at least 60 people. “Metropolis and some of its partners (region, prefecture) have on several occasions been questioned about the harmful situation of the 300 skilled taxis without success. In the face of this inertia, several lawsuits can be initiated in addition to a final attempt at an amicable settlement, François Guillaud adds.

To register, simply click on “join” on the action page of the V pour Verdict platform. A Lyon platform that specializes in resolving collective disputes.