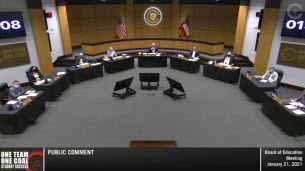 If there was a need for another sign of the tension surrounding the masked debate in the United States, here it is: invited to wear a mask in honor of a professor who died of Covid-19, several officials at a Georgia State Academy, whose principal refused , reports the Washington Post.

Patrick Key, 53, a kindergarten teacher at a public school in Cobb County, north of Atlanta, Georgia, died on Christmas Day from coronavirus after six weeks in hospital. According to the local channel WSBTV, the academy’s officials confirmed that he was infected at school, as did his wife, also a teacher, who survived.

His obituary, still visible online, says: “A private family funeral will be held. A celebration of life will be held at a later date, when it is safe for everyone to attend. Patrick was passionate about wearing masks during the pandemic. instead of flowers, buy and use a mask to protect yourself and others in his honor. “

One minute of silence under high tension

On Thursday, in a meeting with Cobb County Academy officials, Jennifer Susko, an education counselor, spoke to pay tribute to her late colleague and asked for a minute of silence.

After condemning an email from the principal “that devoted only two sentences to the professor’s life, but six paragraphs to boast of Cobb County’s willingness to return to the buildings quickly” in person despite the pandemic, Jennifer Susko asked for a moment of silence in honor of his deceased colleague. “During the silence, I would ask all board members and the principal to put on your mask as a tribute to this teacher, who has done everything you asked him to do, even to teach during a pandemic.” , she continued.

This was followed by 13 seconds of embarrassing silence, during which the three officials who were not wearing the mask, including Principal Chris Ragsdale, remained impassive and quietly refused to put it on.

“I want the minutes to reflect that some of you did not wear masks, the last request from a passing Cobb teacher. Your actions during the two minutes have been more eloquent than your words. We see where your priorities are. lies, “continued the education adviser.

Patrick Key’s widow responded on her Facebook page: “I have many emotions, but no socially appropriate words to describe them”, we can read.

When asked by the Washington Post, a representative of the academy replied that the board followed its own recommendations, namely to make the mask optional when a sufficient distance is maintained.

In Cobb County, nearly 8% of residents are in favor of Covid, a figure that has doubled in two months as face-to-face classes have resumed schooling. The educational community is very upset.

Wearing a mask is still a subject of conflict in the United States, while Donald Trump fought against it for a long time. For his part, last Wednesday, a few hours after his inauguration, Joe Biden signed a decree requiring the use of masks and social distancing in all federal buildings. However, it cannot extend it to the whole country.