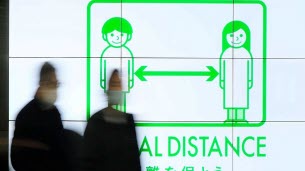 Japan is seeking to isolate a new variant of coronavirus, which was recently discovered in four people who arrived in the archipelago from Brazil, so that it can be analyzed further, local authorities said on Tuesday. This variant of SARS-CoV-2 is an evolution of “a viral line from Brazil, circulating in the Amazon”, tentatively called “B.1.1.28 (K417N / E484K / N501Y)”, confirmed the Brazilian researcher. Felipe Naveca, who collaborates with the Fiocruz Institute.

“The results suggest that the mutation detected in the B.1.1.28 variant is a recent phenomenon, probably occurring between December 2020 and January 2021,” the institute said in a press release.

Get details at the moment

Felipe Naveca is conducting “a genome study of people recently infected with SARS-CoV-2 in the state of Amazonas, to detect the circulation of this virus line,” he added. An official in the Japanese Ministry of Health explained that “in order to further analyze the variant, we must first isolate it”. “It can take between several weeks and several months (…), so it is difficult at the moment to say when we can provide details” about this variant, he added.

Japan cannot immediately say whether it is more contagious or more dangerous than other varieties already discovered in the world. It was discovered on two adults and two children who arrived in Japan on January 2 from Brazil, the Japanese health authorities explained. One of these people, a man in his 40s, was then admitted to a hospital in Japan with difficulty breathing, while a woman and one of two children, a boy, developed moderate symptoms. . The fourth person, a girl, is asymptomatic.

The more Covid-19 spreads, the more likely it is to develop further

Japan warned the World Health Organization (WHO) this weekend about this new variant. “The more Covid-19 spreads, the more likely it is to develop further (…). The transmission of certain variants of the virus appears to increase,” commented WHO Director – General Tedros Adhanom Ghebreyesus on Monday. Not all mutations in a virus are necessarily more contagious or dangerous. But the December discoveries of a highly contagious variant of Covid-19 in the UK, then another in South Africa, raised serious concerns around the world, particularly sowing doubts about the effectiveness of vaccines in meeting a possible ultra-resistant form. of coronavirus.

The Japanese National Institute of Infectious Diseases said that the new variant discovered in Japan had similarities to those identified in the United Kingdom and South Africa.