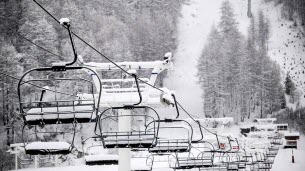 This was not a surprise to professionals in the sector: The government plans to extend the closure of ski lifts at French ski resorts, government sources said Monday night.

This decision will be made this Wednesday morning under the Defense Council and can be announced on Thursday during the weekly press conference. Until then, the government is preparing people’s minds for this hypothesis. In addition, professionals should be received by members of the government by Wednesday morning. The duration of the extension of the closure – if it is traded – remains to be defined.

Access to ski resorts will, however, remain open and outdoor activities possible until now.

The health situation remains too fragile

A turning point had been set by President Emmanuel Macron for January 20 for the fate of winter sports. As the February holidays approached (from Saturday 6 February in zone A to 8 March for zone B), the sector was counting on this date to consider reopening. On Sunday, Club Med CEO Henri Giscard d’Estaing called on Prime Minister Jean Castex to reopen ski resorts for the winter break to “save” the mountain from “despair”.

However, the epidemiological situation is still too fragile in France, the country is still far from the target of 5,000 daily pollutants, and the new, more contagious varieties are worrying.

The Secretary of State for Tourism, Jean-Baptiste Lemoyne, said this morning at the microphone of France Culture: “We know how important the month of February is, but we must also deal with these variants that were not anticipated. In December and appeared in late December, the beginning of January. It is naturally the health situation that must govern the decisions. “

If the ski lifts are to remain closed, the authorities will support professionals involved in allocating specific assistance.

Invited by C à vous France 5 this Monday night, Prime Minister Jean Castex said: “It is not a question of prioritizing economic issues over health issues.”

In a letter addressed to Jean Castex Henri Giscard d’Estaing, whose group has 14 mountain clubs, wrote: “On January 20, you will decide on the survival of the French mountains. It is the fate of one of the few French world leaders, and its players, which is in your hands “.

“Winter sports represent 50% of GDP in Savoie, and slightly less in Haute-Savoie”, he also recalls in an interview with JDD and emphasizes that “more than 100,000 seasonal jobs may disappear”.

Without commenting on a reopening date, the Minister for Small and Medium-sized Enterprises, Alain Griset, answered on Radio J on Sunday that the government’s goal “is to avoid a mix of populations”. And according to him, the problem is “not so much the fact of skiing”, but regrouping of people “when you finish skiing at 16 or 16.30”.