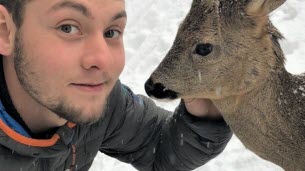 The adventure that Laurine Miguet, 18, and Tristan Portas, 21, have just experienced will undoubtedly remain engraved in their memory. The two young people are from Cuvery. A regular commute, a routine.

Until Wednesday, December 30, around noon, a few hundred meters from Poizat-Lalleyriat, Laurine and Tristan saw a brown mass at the roadside. “There was no doubt that it was an animal,” says Laurine. We stopped hoping to find him alive, he was inert. He could have been hit by a vehicle, given his position. As we walked forward, we recognized a fawn, a small deer, which was moving, or rather, trying to move. He could have been in trouble on the icy road. “

The hikers stop. “We took the time to get closer so as not to scare him, and after a few minutes we were by his side. We started stroking him, which he seemed to like. Friendly contact was established, we luckily looked for a possible injury. “Then we straightened him up, put him on his feet, and he got up as best we could, while we were in place, by our side,” they say.

“We wanted to keep it off the road and carry it delicately, meter by meter. He was his weight! But he was still very fragile, completely confused and came back to the road. He was paralyzed by the cold. Besides, we caressed it, rubbed it for several minutes to warm it up. Relief when we saw that he began to react. We then led him to the nearby forest, which he plunged into, no doubt in search of his mother. But what particularly touched and touched us was when, before he left, he, as if to thank us, turned to us. We took the opportunity to give him one last hug, a goodbye kiss. “

Abandoned by his mother?

They stayed after the departure for more than a quarter of an hour, in case he turned around and joined the road. This little fawn could have been abandoned by her mother. If she had had a new litter, nature, sometimes cruel, could have forced her to leave the older one to take care of her new babies.

The two young rescuers will not stop there, but will stop regularly at the place where they found the fawn, and take some steps in the forest in case Bambi still needs them.