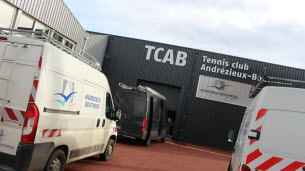 This edition of Andrézieux’s Engie Open will remain one year apart. And not just because the municipality has decided to carry alone with the Andrézieux-Bouthéon Tennis Club (TCAB) this new edition of the $ 60,000 tournament.

Following the cancellation of the $ 15,000 tournament, just three days before it was to be held, Sports Assistant Cyrille Chapot wanted to set the course: “The volunteers and leaders of TCAB are over-motivated to put this event on the right foot. shine “. And it is not the health crisis that will ruin all their efforts. Not this time. Although the context inevitably disrupts habits, the transformation of the courts near the chapel has already begun a few days ago.

“Not the same taste”

“Despite the camera, we will try to make this event a tennis celebration. But necessarily it will not have the same taste as previous years, the elected continue.

The organization, placed under the eyes of the French Federation and a supervisor, will be investigated. But no worries for the organizers, everything is framed with special respect for barrier movements. “The players are placed like in a bubble and have no contact with the outside. Only physiotherapists are allowed to approach them, “adds the elected official. Furthermore, tests will be performed throughout the competition to avoid unpleasant surprises.

In order not to take any risks, the leaders have chosen not to organize an evening with the partners as in previous years. “These pleasant moments are usually important, but this year we could not take any risks,” explains Cyrille Chapot. No one watches either in the bays. And the latter added: “It’s heartbreaking, but school children can’t come either.”

No party for partners or children in the stands

Little consolation, the field promises to be raised with especially the presence of the seeded No. 1, French Océane Dodin, 107th player in the world, or the Canadian Eugénie Bouchard who had managed to climb to 5th place in the table. global.

Note that the semi-final and final are broadcast on the municipality’s social network. A way to smooth out the bitterness of the faithful spectators. We very much hope that the event will find a “normal” organization for the next edition.