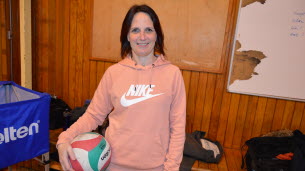 Pauline and Émile have been licensed from a young age at Firminy Volley-Ball, and have grown over the years in their favorite club and ended up starting a family with the arrival of Lucas and then little Léni in September. Unfortunately, their lives changed when on July 22, 2020, on holiday in the south of France, they learned that Lucas does not suffer from conjunctivitis, but from a cancerous tumor in the eye.

One of the two parents had to quit his job

For six months now, chemotherapy treatments and examinations have followed each other. Surrounded by her parents’ infallible love, Lucas fights the disease with exemplary courage. For Firminy Volley-Ball, the time has come for solidarity and the club is arranging a raffle, the benefits of which will go entirely to the family.

Rachel Dupraz, general manager of FVB, says: “We wanted to support them in this fight to facilitate their daily lives, since one of the two parents had to leave the job in order to be permanently by Lucas’ side. Social networks allowed us to create a big raffle with exceptional prizes. All this mobilization of the world of sports, but also the world of entertainment (Dub Inc French reggae group also joined them, editor’s note) warms our hearts in this gloomy period. We hope that many participants will join. »The raffle takes place online. The draw is scheduled for February 6.

The club was able to gather exceptional matches, including signed jerseys from Édouard Mendy, Chelsea football goalkeeper, Clermont footballer or even Dijon, ASM club in the top 14, outfits from the French team of volleyball, a French cyclist Romain Bardet jersey , the French footballer Gaëtane jersey, and of course jerseys from the biggest French volleyball clubs, etc.