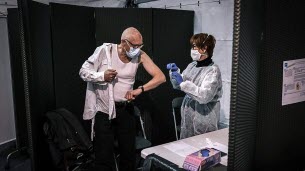 Two of the most important liberal medical unions on Thursday condemned the difficulties with public authorities on the spot to open vaccination centers and get vaccine doses.

“Anger” is rising among GPs, warned Jacques Battistoni, president of MG France, during a press conference. “We do not provide funds to operate on the liberal vaccination centers” to administer the vaccine against Covid-19, he said, testimony of support.

We see a kind of refocusing in hospitals

“We do not have authorizations easily, or vaccine assignments, that we have to negotiate,” he said, criticizing a difference in treatment with the hospital. “We see a kind of refocusing in hospitals”, which concentrates “with a scoop of three quarters” of the vaccination centers that are open. “It makes it possible to increase the number of ‘vaccinations faster, but’ it will be more difficult to get people over the age of 75 near their homes,” he warned.

Jacques Battistoni called for “bringing the vaccine closer to patients”, with “a distance that must be as short as possible”, stressing that at least 70% of GPs “are ready to vaccinate themselves”, according to a survey conducted last week with 2350 practitioners.

The administration is entangled in the weight

“We must accelerate”, also estimates Jean-Paul Ortiz, president of the CSMF, the first trade union among liberal doctors, which “has the impression that the administration is entangled in its weight”.

One sixth of the delivered vaccines used

“We used one-sixth of the vaccines provided by Pfizer,” or just under 250,000 people out of about 1.5 million doses received, he said. “Unlock all these bottles for us!” He said and added that “every lost day has catastrophic consequences from a health and economic point of view”.

In particular, this should allow “all caregivers to be vaccinated as soon as possible, and not just those over 50”. “The country must do everything in its power to preserve its front-line caregivers,” he explained, especially for doctors whose vaccination “serves as an example” for nurses and caregivers where I membership is much less massive.