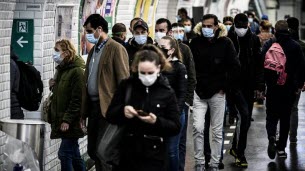 The National Academy of Medicine on Friday recommended avoiding talking and calling public transportation, even masked.

The mandatory use of a mask in public transport, where physical distance cannot be respected, “must be followed by a very simple precaution: avoid talking and calling”, the academy argues.

However, she rejected the new recommendation to leave homemade masks in the face of the arrival of more infectious variants of the Covid-19 virus. Following the recommendations of the High Council of Public Health (HSCP), Minister of Health Olivier Véran on Thursday urged the French to no longer use homemade masks that were considered inadequate filtration, nor the least filtering industrial textile mask (known as “category 2”).

A reinforcement that “falls under a precautionary principle” but that “lacks scientific evidence”, the Academy of Medicine responded in a press release on Friday, estimating that the “effectiveness of masks” in general “has never been wrong when they are properly worn “.

“Such a change in the recommendations for a practice that the entire population had succeeded in familiarizing themselves with risks creating misunderstandings and reviving doubts about the benefits of the official recommendations,” the academy continues.

“Do not change the barrier movements”

She also doubts the idea of ​​extending the physical distance from 1 to 2 meters between two people, a “proposition sound in theory, but not applicable in practice”.

Despite the “threat” from the new variants, the academy recommends “not to change the barrier movements as they have been defined and improved for several months”, but to keep in mind good behavior.

Use the mask at all times in public spaces “even when the physical distance is greater than 1 meter”, cover the mouth and nose with the mask …