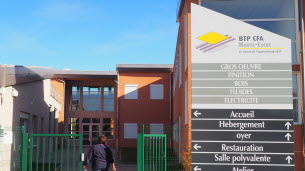 Due to several positive cases of Covid, the CFA du BTP de Bains did not open its doors on Monday. The establishment will be closed until next week.

“It is a measure taken as a precaution, we have the situation perfectly in hand,” reassures the director, René-Paul Poussardin.

“This situation hangs in everyone’s face”

The training center for apprentices in the building and public works apologizes for seven positive issues within the administration team, which has nine people. “I am also one of the polluted. The first symptoms appeared on Friday morning. Two of my employees did not come to work. The tests performed on the same day confirmed that we had all contracted the virus, the director confides. In addition, and visible unrelated to these cases, two bricks also tested positive.

Based on these results, I decided on Saturday morning to close the business before receiving instructions from ARS (Regional Health Agency). This decision was necessary, it is not a question of letting the virus contaminate our apprentices, continues René-Paul Poussardin, as we feel moved by telephone. For eleven months, however, we have followed a strict protocol. Evidence of this is that when managing a collective, this situation hangs in everyone’s face. “

An establishment with 400 apprentices

BTP CFA has almost 400 apprentices who change, at a rate of 150 young people per week, alternating with their own training. During this week, the decision was made to ensure pedagogical continuity by offering distance learning courses.

As for the buildings, they are subject to a strengthened sanitary protocol, including disinfection of offices and workshops with a view to re-entry scheduled for 18 January.