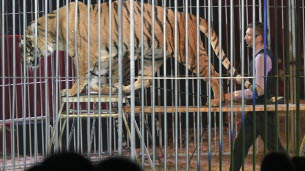 On the city’s Facebook page, the mayor of Chasse-sur-Rhône, Christophe Bouvier, took a stand against the circus with wild animals. While a law on animal cruelty is currently being discussed in the National Assembly, the first city councilor has invited deputies to ban these circuses.

“I will oppose the arrival of these circuses to the city”

“A lion or a bear is not made to live in a cage. Many countries also ban the presence of wild animals in circuses such as Belgium, the Netherlands, Italy, Portugal, Denmark … France would be honored to join them. In any case, as mayor, I would oppose these circuses coming to the city, “recalls Christophe Bouvier, who had already positioned himself in this direction in the municipal council.

When we were contacted, the mayor of Givors, a neighboring town, could not respond to our immediate requests to know if he was associated with this initiative.

And you, do you agree with this measure? Vote here.

Also read: Wild animals in the travel circus: it’s over?