Clubhouse, a popular audio-based social app that is currently only available for iOS users, is getting closer to an official Android launch. Despite the fact that the co-founder has announced that an Android app is in the development, he hasn’t said anything about the project. However, one of the teams’ developer has shared a couple of photos on Twitter, revealing that the Android app is almost complete and is currently undergoing final testing.

Clubhouse Android app developer posted on Twitter. The images show the same user interface that we see when we open a profile on Clubhouse, thanks to Android app developer Mopewa Ogundipe. However, based on the notification panel at the top of the screen, the app is most likely running on an Android device. In addition, in her profile’s bio, Ogundipe writes “sent from my iPhone” in the first image and “sent from my Pixel” in the second, suggesting that the final testing is being done on Android once again. 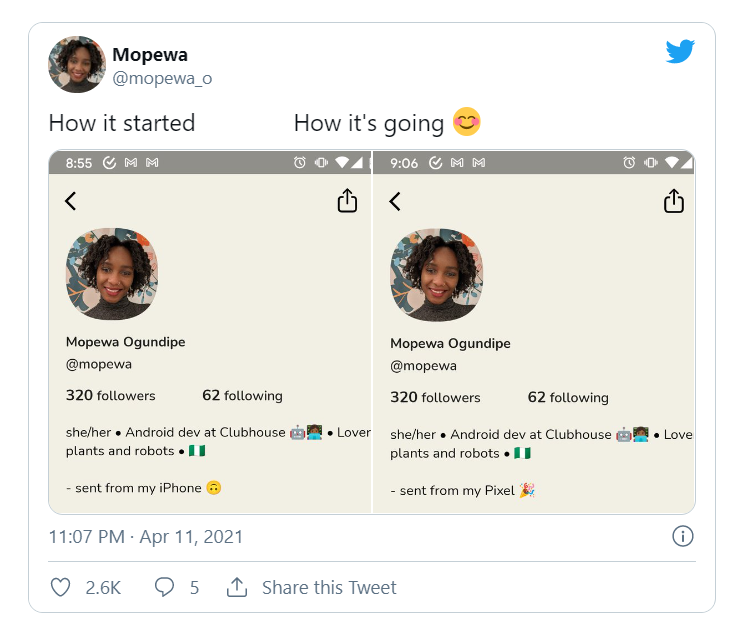 Clubhouse CEO and Co-founder, Paul Davidson, had previously stated that an Android app was only a matter of time. It was a top priority for him, and he saw it as crucial to growing the chat platform’s global reach.

The audio-chat platform’s arrival on Android, on the other hand, may be more crucial to its development. The company has stressed the importance of promoting Android users on many occasions, but there has been little improvement in this area so far. However, it appears that Clubhouse has begun internal testing of the Android app. It could be available on the Google Play Store as soon as next month.

There is still no information about when Clubhouse’s Android app will be out. However, before opening it up to millions of users around the world, the company will need to focus a lot on their server capacities.

The company can’t afford to put off its Android launch any longer. Rival companies like Facebook and Twitter are focusing on bringing similar audio-focused chat features to their platforms, which already have a large user base and well-built Android, iOS, and web apps.

Even Clubhouse was beaten to the Android launch by Twitter’s Spaces. Facebook, on the other hand, recently released Hotline, a live Q&A app inspired by Clubhouse. Inside its current video chat platform Messenger Rooms, the social media giant is developing a Clubhouse rival. Similar services are currently being developed by LinkedIn, Slack, Telegram, Reddit and so on.