Clubhouse announced on Sunday that its Android app will be available worldwide this week.

In addition, the company stated that it was working to maintain feature parity with its iOS counterpart. The news comes after a beta version of the Android app was released in a few markets.

According to a report from TechCrunch, Clubhouse will release the Android app on Tuesday in Japan, Russia, and Brazil. Three days later, other markets such as India and Nigeria will get the Android, followed by a global release. 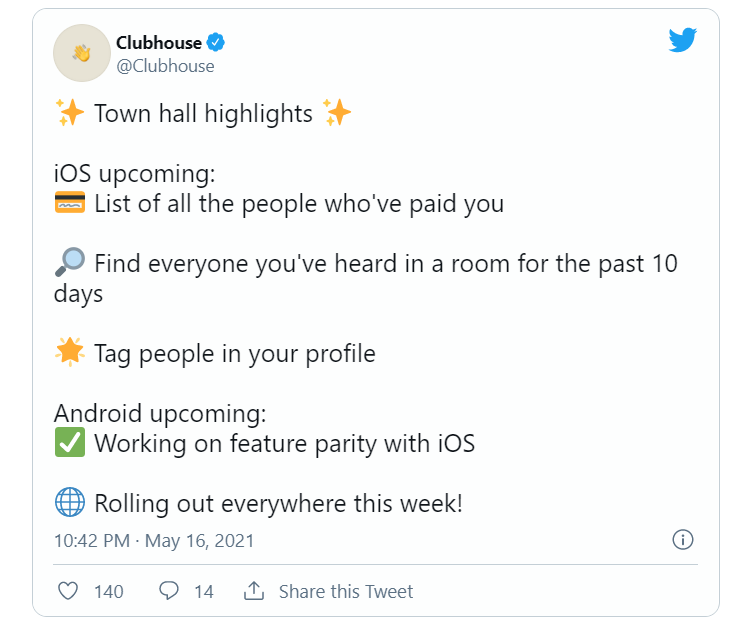 Last year, Clubhouse was released as an iOS app.

According to reports from many mobile insight companies, Clubhouse has struggled to sustain its growth rate in recent months.

Clubhouse’s introduction to the Android platform is likely to help it attract more users quickly.

Earlier this year, Clubhouse acknowledged that an Android version was one of the most requested features.

Because of Clubhouse’s success, technology companies such as Facebook, Twitter, Telegram, and others have launched or announced their own versions of audio-based social networking feature.

It’s uncertain if Android users will get the full platform this week or later on.

Furthermore, it will remain invite-only for the time being.

However, the company’s CEO, Paul Davison, stated that the invite-only status will be phased out in the future.

Clubhouse has also begun experimenting with a monetisation function for its creators, which will enable them to make money by hosting special sessions.

The ability to earn money would be open to a select test group of creators at first, with more creators receiving it later.

Clubhouse claims to be working on achieving “feature parity with iOS.”