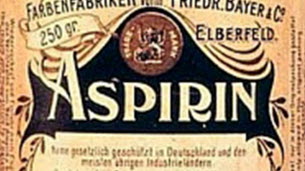 On February 1, 1899, aspirin was marketed for the first time.

Humans have been treating themselves for over 3,000 years by not using aspirin, but its compound: salicylic acid. It is especially found in willow bark.

The Egyptians used it as early as antiquity, and we find traces of it in one of the oldest known medical treatises: Eber’s papyrus, 3,500 years old. Hippocrates, the father of Western medicine, used it as early as the 5th century BC. AD to relieve pain and fever.

Development of a modern fabric.

It was not until 1829 that the French pharmacist Pierre J. Leroux succeeded in isolating the active principle from willow bark. He calls it “salicyline”, from the Latin “salix”: arrow. Two years later, the Swiss pharmacist Pagenstecher discovers that the same principle can be extracted from the Reine-des-meadows flower.

But the problem is that salicylin causes heartburn.

Strasbourg chemist Charles Gerhardt was the first to correct these errors. In 1853 he succeeded in synthesizing acetylsalicylic acid. But the product is not completely clean, and Gerhardt died three years later, before he could complete the project.

There is a German picking up the torch: Félix Hoffmann. In 1897 he developed a pure product extracted from the Reine-des-près. Hoffmann works for the Bayer Laboratory, which acquires the rights.

On February 1, 1899, the company marketed the drug under the name “Aspirin”. “A” for “Acetil”, and “Spir” for Spirsaüre, the German botanical name for Meadowsweet. First marketed as a powder, aspirin was finally offered in 1904 in the form of small tablets in a glass bottle.

It was thanks to this drug that Bayer, who had the exclusive right until 1917, became a pharmaceutical giant.

After World War I, defeated Germany was forced to relinquish its rights to aspirin. Evidence that it had acquired geopolitical significance.