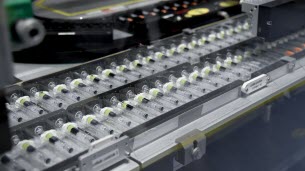 In the midst of the global battle for the purchase of antikovid vaccines, Africa, which has so far lagged behind to vaccinate its 1.3 billion inhabitants, is accelerating and has guaranteed hundreds of millions of doses for the continent.

Only a handful of African countries have so far begun vaccinating the population, including Morocco, Egypt, the Seychelles and Mauritius.

Most countries on the continent depend on the World Health Organization (WHO) and the African Union (AU) for supplies. Thanks to the units of the two organizations, the WHO expects 30% of the African population to be vaccinated by the end of 2021.

AU said on Thursday that they had received 400 million extra doses. A total of 670 million vaccines have been promised to Africa by the Union.

These 400 million doses were obtained from the Serum Institute of India (SII), which produces high-speed vaccines developed by AstraZeneca and the University of Oxford, for India and large parts of developing countries.

The WHO Covax system, for fair access to vaccines, will also provide doses for 20% of the population.

“In March, we will definitely see most countries start vaccinating,” said Richard Mihigo, coordinator of the vaccination program and vaccine development at the WHO Regional Office for Africa on Thursday.

“It’s a slow start, but we expect things to accelerate in the coming months,” he added at an online press conference.

Since the pandemic began, Africa has officially been one of the continents least affected by the virus, with 3.5 million cases and 88,000 deaths.

But most countries on the continent are hit by a new wave that has forced them to return to strict health measures. Infections have increased by 50% in the last four weeks, and the number of deaths has doubled, according to the WHO.

And the discovery of new varieties, in South Africa and the United Kingdom, known to be more contagious and continuing to spread around the world, has also accelerated the rush for vaccines.

Most recently, Senegal announced on Thursday that they had discovered the British variant for the first time. With almost 26,000 cases including 614 official deaths in this young but poor country, the pandemic is burdensome for the health system.

Africa will need 1.5 billion doses to vaccinate 60% of the population and achieve herd immunity, it is estimated. For a cost that fluctuates between 5.8 and 8.2 billion euros.

All vaccines will be available “between this year and next year,” promised the head of the African Center for Disease Control and Prevention (CDC) at AU, John Nkengasong. “A historic effort”.

At the same time, some governments have started bilateral negotiations with pharmaceutical companies to get more vaccines, with the risk of raising prices.

The African country most affected by the virus, with more than 1.4 million cases and nearly 43,000 official deaths, also has access to nine million vaccines from the Johnson & Johnson laboratory and will receive 12 million doses of Covax.

During the virtual summit in Davos this week, the South African head of state, Cyril Ramaphosa, paralyzed the rich countries that “monopolize” the vaccines, indignant at “vaccine nationalism”.

He urged those who can afford “up to four times what their population needs” to make doses available.