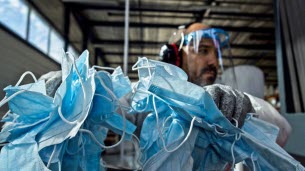 If there were signs of Chinese dominance in industries and exports, there is one: from March to December 2020, at the height of the coronavirus epidemic, the Central Empire exported no less than 224 billion antiquated protective masks, Chinese customs announced on Thursday.

If we compare this number with the world population (about 6.4 billion people outside China), it means that Beijing sent the equivalent of 35 masks per person in the world by 2020!

The value of these exports is estimated at around 43 billion euros, not counting 13 billion of other personal protective equipment (suits, dresses, gels). Boosted by this unique demand, China’s global trade surplus was at its highest level since 2015, at more than 440 billion euros (+ 27% over one year), a slap in the face to Donald Trump, who had rebalanced trade to a priority for his presidency.

First affected by the epidemic, China was the first to recommend the use of a mask and was heard the general mobilization of factories from January 2020, caused global competition in orders. According to Les Echos, up to 76,000 mask-producing companies have been identified in the country, which have managed to produce 200 million by the end of April, ten times more than before the pandemic. At the end of the year, there was more time to overproduce masks.

Beijing is expected to be one of the few major economies to announce positive GDP growth in 2020 on Monday. In the third quarter, growth was 4.9% in one year.