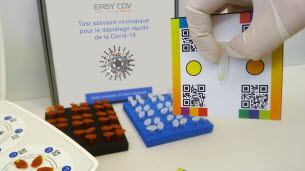 Since last week, a new screening weapon has joined the armada for tests approved and refunded in France. The Easy Cov test, which detects Sars-Cov-2 in a saliva sample, has just been given the green light by the health authorities. Now he receives compensation from the social insurance.

How does it work?

This test detects viral RNA in a saliva sample, collected either under the tongue of a pipette, or by salivating saliva in a pot. The test is therefore much simpler and less uncomfortable than for a PCR or nasopharyngeal antigen test, performed by a swab in the nose.

Once recovered, the saliva sample makes it possible to achieve a result in 40 minutes, via a technique called RT-Lamp, developed by the company Skill Cell and Sys2Diag / CNRS.

This technique ”does not require machines as in the RT-PCR laboratory. Healthcare professionals can equip themselves with them to perform tests in practice, nursing homes or laboratories, explains Sofia El Annabi, business developer at Skill Cell. The Easy Cov test has a sensitivity of 86% and a specificity of 99%, depending on the company that markets it.

If it’s that simple, why not develop it more massively?

The Haute Autorité de Santé issued its statement on saliva experiments on 28 November. Verdict: they are sensitive to symptomatic people, but less so to asymptomatic people. The sensitivity of the EasyCov® test is satisfactory for symptomatic patients (84%). On the other hand, the specificity is not: at 92%, it is below the minimum performance required by HAS ”, observes HAS.

“Saliva samples have lower sensitivity than RT-PCR and better than anti-genes,” sums up Lionel Barrand, president of the National Union of Young Biologists. According to him, “saliva samples are not an alternative to PCR because performance is poorer”.

The Haute Autorité de Santé therefore recommends using these tests only “in symptomatic patients for whom nasopharyngeal sampling is impossible or difficult”. For example, in people with mental illness, in nursing homes or in kindergartens for young children. “The poorer specificity requires that an RT-PCR test be performed on a saliva sample in case of a positive test,” she also recommends.

In its decree, the government provides for wider use since it only retains the recommendations from HAS for the last part, the need to double the positive test with a positive PCR on a saliva sample.

Where should I do it?

From the manufacturer of Easy Cov, which defends the effectiveness of the solution, so that a large part of the population can be tested wider and easier. The only requirement is, “according to the decree laying down the conditions of use, the test must be performed by a healthcare professional – biologist, doctor, nurse – in a company that offers adequate guarantees for quality and health safety. The analysis phase can be performed by a doctor in a doctor’s office, a health center or a nursing home or by a laboratory, Sofia El Annabi explains.

In summary: you can take the test at the doctor, nurse or in a laboratory, but not at home (even if the liberal nurse, for example, comes to you).

Soon a self-test at home?

To do the test yourself at home, you have to wait a little longer. “We still need a development phase so that the patient can take the sample and send it himself, out of respect for the cold chain in the transport of the sample for analysis, and delay because the saliva must be analyzed within three hours after the sample,” explains the business developer at Skill Cell.

Where can I buy them?

It is therefore not possible at the moment to buy them at a pharmacy. Doctors, social medicine centers or laboratories can order. They therefore give the test to the patient.

“The tests will be refunded 100% of the social security. The amount should be between 46 and 70 euros, depending on who performs it. Our production costs are around 20 euros, and the costs of sampling and analysis costs must be added, ”explains the product development manager.

What volumes should they meet the demand?

Skill Cell has already sold between 250,000 and 300,000 tests abroad. Following the green light from the French authorities, it is preparing to increase. “We are able to produce 250,000 tests per week, and to assemble an additional 50,000 per day according to demand,” says Sofia El Annabi.