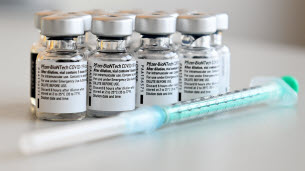 Without being able to offer its own vaccine against Covid-19 at the moment, the French laboratory Sanofi will drain the bottle from competitors Pfizer and BioNTech and package more than 100 million doses this year for the EU.

The announcement of this promise was made on Tuesday by Sanofi CEO Paul Hudson after the French government repeatedly asked him recently to make its production lines available to competitors.

Production in its German factory

In an interview published on the website of the newspaper Le Figaro, Hudson explains that Sanofi will use its German factory in Frankfurt to package the vaccine, which will be delivered to it by competitors from July. “This production site is located near the headquarters of BioNTech (in Mainz, editor’s note), This will make things easier,” argues the head of the French group. Production will be determined for the EU, and therefore partly for France, he added.

This agreement comes at a time when several laboratories are having difficulty maintaining the high speeds required to honor the contracts they have signed. The American group Pfizer and the German biotechnology BioNTech were the first to warn in mid-January that they were unable to keep the schedule originally set with the EU, before saying that they were able to limit delivery delays to one week. Last week, it was the trip to Britain’s AstraZeneca, whose vaccine has not yet been approved in the EU, to indicate that deliveries would be less than expected in the first quarter, and upset Brussels.

On Tuesday, European Commission President Ursula von der Leyen put pressure on producers by saying they must “fulfill their obligations”. “Europe has invested billions to develop the first vaccines and create a real global common good. Now companies must keep their promises,” she argued in a video intervention at the World Economic Forum in Davos. In response, AstraZeneca CEO Pascal Soriot assured Tuesday night in Le Figaro that his group “certainly does not take vaccines to Europeans to sell them elsewhere at a profit”, but promoted production problems that we had to resolve.

In early January, Brussels announced a new agreement with the Pfizer-BioNTech duo, which will provide a fixed pre-order for 200 million extra doses of their anti-Covid vaccine, with the possibility of 100 million more. This was in addition to the contract already entered into for 300 million doses of the vaccine, approved since December 21 by the European Commission.

Regarding his own vaccine projects, Paul Hudson assures us that the recombinant protein one, a technology that Sanofi uses for its flu vaccine, is “developing well”, despite a few months delay and should hit the market in the last quarter of 2021. such a launch window makes sense because there will still be people to be vaccinated around the world at that time.

On the other hand, while several variants of the virus responsible for Covid-19 have been identified, and questions remain regarding the efficacy of vaccines already marketed against them, he believes that this technology “may be more effective against these mutations”. as messenger RNA.

However, the French laboratory is developing a vaccine based on this latest technology, specifically used by Pfizer and BioNTech, in collaboration with an American biotechnology company. “We believe we can enter the clinical phase with an RNA vaccine against Covid from the first quarter of this year,” Paul Hudson hoped.

Traditionally, the development of a new vaccine takes an average of ten years, according to industry experts. If Sanofi succeeded in doing this for Covid-19 within two years, it would remain an exceptionally short time, but the laboratory suffers from the comparison with its faster competitors. This delay has led to questions about the state of French research, doubled since the announcement by the Pasteur Institute on Monday of the end of the development of the main vaccine project against Covid-19 in collaboration with pharmaceutical laboratory MSD, the name of the American giant Merck outside the US and Canada.