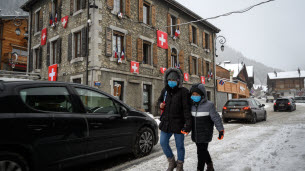 From February, Switzerland will impose quarantine on travelers coming from the south of France, from the Provence-Alpes-Côte d’Azur (Paca) region, as well as from several new countries, including Portugal and Israel.

A total of five regions in neighboring Switzerland and ten countries were added to the updated list published by the Federal Office of Public Health on Wednesday.

In neighboring countries, in addition to the PACA region, there are Emilia-Romagna and Friuli-Venezia Giulia in Italy, Thuringia in East Germany and Salzburg in Austria. Among the countries added are also Spain, Cyprus, Lebanon and Monaco.

Among the countries added are also Spain, Cyprus, Lebanon and Monaco. However, the mandatory ten-day quarantine will be lifted on Thursday for travelers coming from Croatia, Denmark, Georgia, Luxembourg and Serbia.

The decision to include a country or zone in the list depends on the occurrence of the last 14 days, namely the number of new infections per 100,000 people registered during this period. If the occurrence in a country exceeds at least 60 in Switzerland, the country is listed.