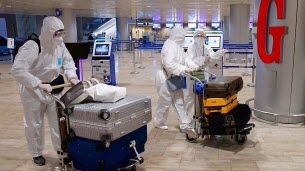 The British variant of coronavirus continues to spread around the world and was present last week in 60 countries and territories, 10 more than on January 12, the World Health Organization said on Wednesday.

The South African variant, which, like the British, is much more contagious than the original SARS-CoV-2 virus, spreads more slowly and is present in 23 countries and territories, or 3 more than 12 January, the WHO specifies in its weekly epidemiological review.

The WHO has also indicated that it monitors the spread of two other varieties that have appeared in Brazil, P1, which appeared in the state of Amazonas and also discovered in Japan in four people from Brazil and another variety.

“Little information is currently available to assess whether the transmissibility or severity has been modified by these new variants,” the UN agency said, but stressed that their genetic characteristics similar to the British and South African variants necessitated further studies.

The British variant, which was reported to the WHO in mid-December, is estimated to be 50 to 70% more contagious than the original new coronavirus, is present in the WHO’s six geographical areas, while the South African variant is only present in four of them marked WHO. without specifying which.

Not more dangerous, but more contagious

These two variants, which are much more contagious, are not a priori more dangerous, according to current research, but by making more people sicker more easily, they increase the pressure on health systems, which in certain countries such as the UK or US are sometimes on the verge of explosion.

The question of the effectiveness of vaccines against these new variants has also arisen, but nothing so far shows that the products used so far are less effective.

In addition, laboratories have ensured that they could quickly deliver new versions of their vaccine if necessary.

The Covid-19 pandemic has already claimed more than 2 million lives. The WHO notes that the number of deaths increased by 9% in the week ending January 17 from last week, reaching a record 93,000 deaths.