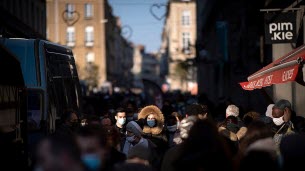 The situation “is worrying”, according to Public Health France. The epidemic is increasing again. The number of cases of Covid-19 increased by 30% in one week (in the period 4 to 10 January). With an R (virus reproduction rate) “significantly greater than 1”, the epidemic recurs. And this is just the beginning: “the appearance of new, more contagious varieties makes it very likely that the virus circulation will intensify in the coming weeks”, warns SPF.

“The incidence has increased among the youngest. This marks a real increase in the number of pollutants in this age group,” said Delphine Viriot, an epidemiologist at Public Health France.

Among the advanced roads: a greater number of tests in these age groups due to the end of the year. “Young people were tested more when they were asymptomatic,” she continues.

On the other hand, the increase is not explained by the English variant – still not very present in the territory according to Bruno Coignard, director of infectious diseases at Public Health France.

In hospitals, the situation is also tense: new hospital admissions increased by 19% in the week of 4 to 10 January, after a period of stabilization. The same increase has been observed in intensive care (+ 21%). This increasing trend should be confirmed on stabilized data in the coming days.

The Flash study conducted on 7 and 8 January by Public Health France and CNR respiratory infection viruses by Professor Bruno Lina estimates that the British variant “will be responsible for 1 to 2% of cases of COVID-19 currently diagnosed in France” . Its presence is “heterogeneous” on French territory.

England had a “rapid development of two to three months. Denmark makes the same forecasts” for the development of the share of this variant in pollution, Bruno Coignard recalls. This is the whole question of contact limitation measures, barrier movements, isolation of positive cases and contact tracking. To avoid an explosion of the epidemic in the coming weeks.