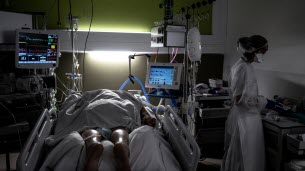 It is the dashboard that worries the government. According to Public Health France, “the situation is very worrying”. Pollution increases again. The proportion of variants was higher than preliminary calculations had led to expect. And the curfew has only a “limited effect” on the spread of the virus.

Figures on the way up

With 20,177 new cases confirmed on average every day during the week of 18 to 24 January, pollution is increasing again (+ 9%). The progression of the epidemic applies to “the whole territory”, although the eastern facade of the country is still most affected.

At the hospital, the indicators increase: new admissions increase by + 16% and those in intensive care by + 20%. And this, while hospitals are already under pressure, with around 27,000 hospitalized patients and 3100 patients in intensive care, as the Minister of Health Olivier Véran reminded on Thursday.

A limited effect of the curfew

The finding is clear: the curfew advanced to 18.00 was not enough to slow down the development of the virus. After a “fall in incidence in the first fifteen departments” after putting it in place, “this trend was reversed” last week. The incidence increased by + 5% in these first 15 wards, + 15% in those who had taken this measure on 10 and 12 January, and finally by + 9% in the 71 wards that were placed under an early curfew on 16 January. .

Its impact is therefore “limited” on the epidemic.

The British and South African varieties probably circulate more than was assumed in the initial estimates.

The final results of the first flash study estimate that they are “responsible for 3.3% of Covid-19 cases diagnosed by RT-PCR in France” at the time of the study, January 7 and 8, with a presence that is heterogeneous in the national territory which may vary from 0.2% in Burgundy-Franche-Comté to 6.9% in Île-de-France. The first estimates were around 1.4%.

A new flash survey is underway on the results of tests conducted on January 27, 2021 to know the evolution of these variants in the epidemic.

“We expect an increase, which we can not yet quantify precisely,” explains Bruno Coignard, a physician at Public Health France.

The final results will not be published until the end of next week, but the first trends could be known at the beginning of the week.