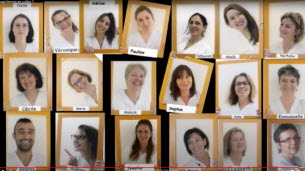 Angry midwives: there is a contradiction in terms … And yet the 18 midwives on the maternity ward at Pasteur Hospital are leaving their reserve. “Ségur de la santé made us angry,” explains Annick Goyet, “because we were put back into the paramedical professions, while belonging to a medical profession. Our unions were not invited to Ségur de la santé. “

According to the Public Health Code, midwives have in fact had a “medical with limited competence” status since 1803. “On the other hand, we are the only ones who are considered paramedics in the hospital and on our payrolls,” Adeline Beaucourt specifies. that midwives are represented with voting rights in the establishment medical committee.However, they appear in the personnel list of non-medical personnel.The same disappointment for the salary increase in 2020, where they were once again not considered a medical profession, while the other medical professions in public were reassessed with 1010 euros gross. “The trigger for the song is Ségur,” says Annick Goyet, “but we have struggled for years. The situation is all the worse experienced in case of legal complications, midwives have a heavy responsibility to take on.” And we know that the complaints is growing, “says Adeline Beaucourt.

The midwives’ struggle also affects working conditions, as they also suffer from the general lack of resources from the public hospital, a unique wave of burnout, the tense flow of replacements and random status. Jennifer Besançon notes that even the liberals have “forgotten” midwives: masks, PCR tests, vaccinations. However, they provide more and more gynecological follow-ups, which is still little known to patients. The next negotiations for the profession “outside Ségur” will take place this spring.

It was Muriel Cavelius who had the idea to make a song. “The melody of Trois Café’s Gourmands was quite nice,” she says, “the ideas for the lyrics came easily to me. It’s almost a first draft. There were hardly any changes. And the whole team joined without hesitation, not only for the song, but also for the music video. The management has given its approval on the condition that no patients show up. “My son is in music,” Muriel Cavenius continues, “and he is the one who recorded us. We made videos, and it was the son of another colleague who edited. If the project has been delayed a bit since Segur, it is because the maternity hospital has not lacked work with a 10% increase in births.