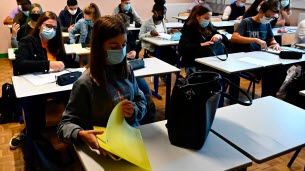 Too much noise at school?

This is a reality for the majority of middle and high school students, according to an Opinionway survey conducted in early January (1): 86% of their establishment is too noisy, whether in rural or urban areas, especially the canteen. (89%), the classroom (34%), study (33%) and even CDI, confidentiality par excellence (18%). External nuisances, such as work or passing cars, disturb 64% of them.

Use a mask, distance and ventilate the premises

In addition to sometimes having headaches (64%), the children and adolescents surveyed admit to having difficulty concentrating (75%) in class, and 74% do not even hear the teacher’s voice clearly. A final figure even more worrying in today’s health context, with students almost all (90%) having a harder time understanding the teacher’s voice due to distance and the use of a mask.

For most of them, the current noise comes mainly from inside (chatter, noise related to equipment, etc.) in the classroom (59%) instead of outside (35%). However, noise from outside is not insignificant: 60% of students believe that there is more noise when the windows are open. Regular ventilation of the premises (now a few minutes every hour) is, however, part of the health protocol which was prepared by the Ministry of Education and has been strengthened since Monday.

Not surprisingly, their main desire for the sound environment at school is to be able to hear their teacher correctly, no matter where they are in the classroom (45%), followed by a reduction in the canteen’s sound intensity (33%), to be able to hear yourself talking in collective rooms ( 24%), have more rooms with a quiet atmosphere to study (22%) or equipment (chairs, tables) less noisy (20%). 18% no longer want to hear noise outside and 13% no longer want to hear noise from nearby rooms.

(1) Opinionway survey for Saint-Gobain Ecophon conducted from 4 to 6 January 2021 with a representative panel of 506 students, 60% of students and 40% of high school students (49% girls and 51% boys) distributed throughout France . .