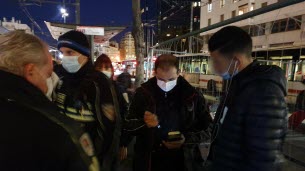 It is 6.15 pm, the curfew has been in force for a quarter of an hour, but Part-Dieu is still swarming this Friday night. On the Vivier-Merle boulevard, between the station and the shopping center, passengers cross the train, employees leaving the office, customers coming to shop and small groups of unemployed young people.

Respect for curfew and use of mask

In the middle of this table, blue uniforms whose task is to verify that all these little people have a good reason to be out at this time. Written at the exit of metro B and on the platforms of the tram lines T1, T3 and T4, their goal is to be visible. Hard to miss it.

“We work with judgment”

The 53 police officers mobilized for the operation, agents from the Public Transport Security Service (SISTC), 3rd / 6th district police station, the municipal police, the department intervention company and CRS, also ensure compliance. Wearing a mask. The system has been established in close collaboration with Keolis, the operator of the TCL network, which also distributes 52 agents for control of transport tickets.

“We work with judgment,” said Commander Jocelyne Massoco, head of SISTC. At this point, there are still quite a few leaving the job. We make sure they have the employer certificate. “

Without transport ticket or certificate

18.30 When you get off the T1 tram, a young man who is caught without a ticket cannot state a valid reason authorizing him to be outside. The station platform is devoid of lighting, the voltage increases. “The area of ​​the station and the mall is under construction, it does not provide a sense of security, especially at night,” said Commander Florence Pelardy, assistant to SISTC.

A little further on, a teenager without a certificate makes sure that he leaves his work study program. He is forced to call his guardian who confirms the statements to the police. He wants to escape the fine.

Without mask in the mall

At the same time, security guards from the shopping center warn agents against a group of drunk young people without masks who refuse to leave the building. Picked up at the exit, the restless will be fined, despite screams and a tear attack caused by alcohol.

19.15 The trams are starting to get scarce, the crowd has disappeared. Only the bicycle cures and some passers-by are left. The police stop the operation.

Review of the operation

Of the 117 people checked this Friday night in Part-Dieu, 16 were fined for non-compliance with the curfew and 12 for not wearing a mask. Five people were arrested for concealing theft, carrying a prohibited weapon, violence against a police officer or pickpocketing.