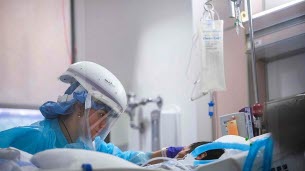 At least 44 employees at Kaiser Permanente Hospital in San Jose, near San Francisco, received Covid-19 last week, and one of them died due to complications from the disease, according to a spokesman. the word of the hospital.

The hospital center opened an investigation to determine if a disguise that an employee was wearing on Christmas Day was involved. It is an innocent inflatable Christmas tree, with a big smile and a big red nose, but some wonder if the fan that the suit is equipped to stay inflated could not have helped to diffuse drops loaded with viruses in the emergency room.

“It was not an activity organized or sanctioned by Kaiser Permanente,” the spokesman said in a statement. Any possible exposure to coronavirus “would be completely unintentional and unintentional, since the person had no symptoms of Covid and only wanted to increase the morale of those around him during a very stressful time,” she said.

According to local NBC-TV, the first to report the information, the deceased was an administrative worker in the emergency department. The channel quoted another hospital staff member as saying that the outbreak could have been caused by respiratory care performed in a room that was not designed for this purpose.

Some staff at the Kaiser Permanente Center had already received a first dose of Covid-19 vaccine, but it takes about two weeks for the body to produce enough antibodies to counteract the infection. The two vaccines that have been approved so far also require a booster three or four weeks later.

According to Kaiser Permanente, employees who had received their first injection less than ten days earlier would therefore not have been vaccinated on the day of coronavirus exposure.
The hospital offered rapid tests to all its employees and performed a deep disinfection of the emergency department.