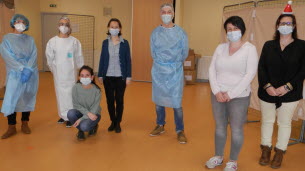 A Covid screening campaign was planned in the city over two three-day periods at the end of 2020, before the holidays. In the first three days, Monday 21st, Tuesday 22nd and Wednesday 23rd December, 146 people were tested, including two positives. The second week: Monday 28 December, Tuesday 29 December and Wednesday 30 December, only 33 people were tested, including a positive. Some people had come from outside.

A total of 179 tests were performed and 3 positive cases were detected. These tests were offered by the region, the municipality and the CCAS (Municipal Center for Social Actions), with the assistance of Lucienne Faure-Satre, deputy. The two nursing practices provided the samples during the six days, from 12 noon to 2 pm at the Maison des associations. The municipality of Beauzac has 3001 inhabitants: the result is a small percentage (less than 6%). Beauzacois may have already been tested in recent weeks.