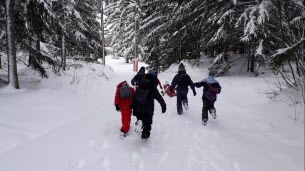 The relationship is strangely reminiscent of one of the first French clusters in February 2020 discovered in Contamines-Montjoie (Haute-Savoie) with eleven British polluters.

This time it takes place in Vallorcine, a small village in Haute-Savoie on the border with Switzerland, where at least 14 Britons have tested positive for covid-19, as our colleagues from Dauphine Libéré revealed.

On Tuesday 19 January, several positive cases of covid-19 were discovered among a group of 26 students of British origin who lived in a tourist resort in the village. The results of several tests performed have not yet been published, but of the first 16 students who were tested, 14 are said to be positive. Everyone has been confined to their homes since Tuesday. However, everyone had presented a negative PCR test on arrival in France.

Is it the English variant?

Samples were also sent to the National Reference Center in Lyon to carry out a sequencing of the virus strain and to determine whether it is the English variant or not.

The staff at the tourist establishment has also been tested and all the results have so far been negative.

According to Dauphiné Libéré, the town hall of Vallorcine has sent warning messages inviting people who have been in contact with the group to come forward as soon as possible.