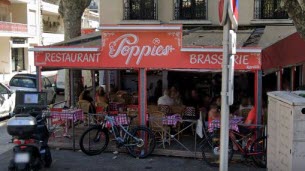 “I have to pay my employees, support my family …”, protests Christophe Wilson. The restaurateur decided to exceptionally open his establishment in Nice on Wednesday, despite the ban in place for several months to fight the Covid-19 epidemic.

“There has to be someone who speeds everyone up, and if it has to be me who has to take the risk, I guess,” Christophe Wilson launches the bravado on the covered terrace of his busy restaurant of a hundred customers.

Located in the center of Nice, the “Poppies” had been closed since October 30 as part of the health measures taken by the government to fight Covid-19, which has killed more than 74,106 in France.

“When I see Carrefour or Prima” …

“I hope that everyone will follow, and that the entire population of our country will resume the course of their normal lives,” asks the 50-year-old restaurateur, who has no plans to reopen the establishment in the next few days.

“When I see Carrefour or Prima or all these multinational companies where hundreds of people gather, I can no longer accept it. I have to pay my employees, support the family and receive my clients “, claims this manager.

The police, who were present near the establishment, as well as many media, did not intervene to verbalize customers who were sitting without masks, under the awning on the terrace.

The restaurateur had initially wanted “indulgence” from the police, but he was then taken into custody and his chef, in an irregular situation, was placed in custody.

However, the prosecuting authority in Nice specified that the restaurateur had been placed in police custody as part of a procedure for hiring an illegal alien.

Estrose tightens to the screw

His initiative contrasts with the position of LR rapporteur in Nice Christian Estrosi. On Wednesday, the latter announced that he had taken a decree banning seasonal rentals in his city from February 6 to 20, to prevent a new outbreak of Covid-19 cases.