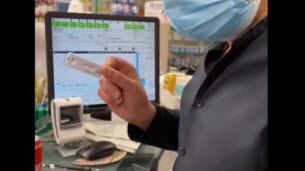 The French company AAZ, which produces specially antigenic tests, filed a complaint on Tuesday with the public prosecutor’s office in Nanterre, for “deliberate danger to others”, after the dissemination on social networks of a video showing a pharmacist performing a test with Coca-Cola. and test positive for Covid.

A joke between friends …

In the wake of the publication, which was shared more than 40,000 times on Facebook, the pharmacist had said that his video was just a joke between friends. “We messed with friends,” the pharmacist explained. But this video has been picked up on dozens of Facebook pages.

“I saw that there are conspiratorial things that took over my video, things that I am fighting against, and now I am their bearer, it is horrible, I am completely overwhelmed,” the pharmacist added.

Experts and the manufacturer of the test also claimed that this type of test did not prove anything.

According to Me Philippe Valent, lawyer for the company AAZ, the complaint is “mainly aimed at actions with deliberate danger to others” and indicates “dissemination of false information to the public”.

This complaint is “currently under investigation before the prosecution informs,” ​​the Nanterre prosecution said.

“Serious and irresponsible facts during a pandemic”

“Obviously, the procedure implemented by this pharmacy did not comply with what is described in the package leaflet of each box, a test procedure used by more than 10,000 pharmacists in France, and many more doctors and nurses diligently,” a statement responded. from the company and criticized “serious and irresponsible facts during a pandemic”.

January 26 also condemned the Union of Unions of Community Pharmacists (USPO) in a statement “an attempt at humor (…) irresponsible and inappropriate”.