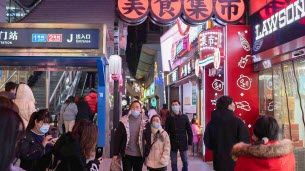 On January 11, 2020, Beijing announced the death two days earlier of the first known victim of the new coronavirus, a 61-year-old man who regularly shopped in a market in Wuhan, a metropolis of 11 million people in central China. The death of this man, whose name is still unknown at this time, will be followed by nearly 1.9 million others worldwide in the space of a year.

Although it is clear that the epidemic first manifested itself in late 2019 in the huge Huanan market in Wuhan, where live wild animals were sold, the origin of the new coronavirus is not there. . Simply because it takes a long time for a virus to mutate to the point of becoming highly contagious, emphasizes epidemiologist Daniel Lucey of Georgetown University in Washington.

The fact that the virus was highly contagious when it was reported in December 2019, therefore means that it had already been circulating for a long time. “It is certainly not plausible” that the virus originated in the Wuhan market, according to Professor Lucey. “It appeared natural several months ago, maybe a year before, maybe even earlier.”

Wuhan market, “victim” of the virus

Problem: The Chinese government, eager to shirk any responsibility for the virus’ appearance, is trying to accredit without proof a theory that the epidemic would have been introduced in China from abroad. They claim that traces of the virus were discovered in sewers in Italy or Brazil before the disease appeared in Wuhan. But these scans do not show anything about the origin of the virus, according to experts.

As early as January 2020, Chinese researchers themselves point to the Huanan market as the origin of the epidemic, despite previous studies revealing that some of the very first patients were not related to this site. The city of Wuhan was quarantined on January 23, when the entire province of Hubei captured more than 50 million inhabitants.

In March, the history of the government begins to change: the head of Chinese anti-epidemiological services, Gao Fu, explains that the market is not the source, but the “victim” of the virus. The place where the epidemic would only grow.

However, Beijing has since given no other probable explanation for the outbreak of the virus, and provided little information about the samples taken in Wuhan. As for foreign experts, they are kept at a safe distance: a team from the World Health Organization, which should have arrived in China last week, was blocked at the last minute, and Beijing said “negotiate” again with the WHO on the progress of the mission.

Traces of the virus deleted or moved

However, detecting the origin of the virus is crucial to preventing an epidemic from recurring. This will make it possible to orient preventive measures against one or another animal species, ban hunting or breeding and avoid interactions with humans.

“If we can understand why (epidemics) are emerging, we can fight their vectors,” said Peter Daszak, president of the EcoHealth Alliance, a US-based association specializing in disease prevention.

The purely scientific role of China was originally hailed internationally, as the country had quickly divided the genome of the virus, as opposed to its opaque handling of the SARS epidemic in the years 2002-03. China “has been relatively open,” admits biologist Diana Bell of the University of East Anglia in the UK.

The problem is that in the chaos that hit Wuhan in early 2020, traces of the virus may have been deleted or moved, further complicating the puzzle. “This is not surprising. Every epidemic unfolds in the same way. In chaos and panic,” observes Peter Daszak.

China, the savior of mankind

Politically, however, President Xi Jinping’s regime does not want to expand over the first weeks of the epidemic, after being criticized at the time for trying to curb medical warnings as early as December 2019. One of them, Li Wenliang, had been accused by police of having “spread rumors”, before she died of Covid on February 7, 2020 at a hospital in Wuhan. His death sparked anger against the regime on social media.

But with the control of the epidemic since last spring, Beijing now presents itself as the savior of humanity, offering its vaccines to poor countries as a “global public good”. In this context, it is not a question of tolerating critical voices. In late December, a “civilian journalist” who had covered quarantine in Wuhan was sentenced to four years in prison.

To make matters worse, the attitude of the US administration has helped to dissuade the Chinese authorities from sharing their knowledge of the virus, says Peter Daszak, who hopes to thaw with Donald Trump’s departure from the White House. The latter poisoned the atmosphere of cooperation by talking about the “Chinese virus” and by suggesting that the latter could have escaped the Wuhan Virology Laboratory – a possibility ruled out by the scientific community.

Researchers believe that the virus comes from bats, but still do not know what other animal could serve as an intermediary to transmit it to humans. “I am convinced that we will eventually find the species of bat that transmitted it, as well as the probable path of pollution,” hopes Peter Daszak. “We will never be sure, but we will certainly have solid evidence.”

But the question of the species is secondary to Diana Bell. “It does not matter what the source is: we just have to put an end to this damn mix of species in the markets. We have to stop trading in wild animals for food.”