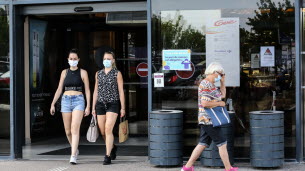 Discussions have been going on for a few days about a possible tightening of the hygiene protocol in stores, especially large grocery stores, said Dominique Schelcher, president of Système U, on FranceInfo on Wednesday.

“It has been a few days that our profession has discussed with public authorities to meet any opportunities,” said Dominique Schelcher.

A meeting this Thursday

A meeting is planned for Thursday afternoon with the retail chains, the Minister of Economic Affairs Bruno Le Maire and the for small and medium-sized enterprises (SMEs) Alain Griset, about a strengthening of the health protocol, one in turn indicated Bercy.

“We are fully aware of that at Système U, which will not pose a problem,” Mr. Schelcher indicated, and also suggested “stricter controls at the entrances to the shops for respect for this meter”.

Asked about the possibility of a new closure of shelves and stores that do not offer products that are considered essential, such as during the second incarceration, he said that it was “one of the big discussions going on with each other”.

“We want these departments to be kept open and therefore also maintain as many forms of business as possible, including small ones, against an extremely reinforced protocol”, he added, expecting “major financial difficulties if it were to take a very serious turn”.