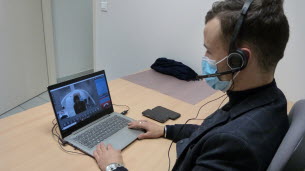 “Nearly 15% of Aindinois do not have a treating physician. With a significant demographic increase (more than 6,000 inhabitants each year for several years) and a supply of doctors in suspense, we decided to innovate by being the first department to distribute five H4D teleconsultation booths, the first of which was installed in Montreal -la-Cluse in November 2020. Place in Belley (Grammont islet rue du Lt André-Argenton) which will be operational from Tuesday 12 January, “said Jean Deguerry, President of the Departmental Council.

Distribution largely subsidized by the state

At a unit price of 105,000 euros per cottage, all designed and manufactured in France, four were subsidized up to 80% (the fifth has been procured previously). “The partnership is important and logical for the state within the framework of the health plan for 2022”, specifies François Payebien, deputy head of Belley.

The other three cottages will be located in Saint-Julien-sur-Reyssouze, Bourg-en-Bresse and in a location in the Pays de Gex that has not yet been defined. “The community with municipalities in Bugey-sud (CCBS) that takes responsibility for maintenance contracts from the second year, the costs associated with references and consumables,” specifies Pauline Godet, president of CCBS.

From local doctors to regional doctors

Leduc from the H4D company specifies where the doctors who can be consulted come from: “The teleconsultant doctors are general practitioners in activity or retired, or emergency physicians. They are all trained in teleconsultation, and work primarily at the local, departmental or regional level. “