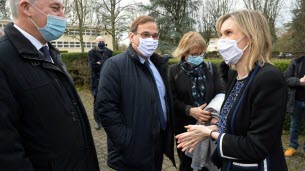 Earlier this week, several rumors reported of a possible visit by a member of the Jura government for the start of the vaccination campaign. There was even talk that the President of the Republic would leave.

“It would have been fashionable, but the agreement books are so tight that it could not be done,” reports Jean-François Louvrier, president of the board of the Jurassic Order. Nothing will happen by the end of the week: the rumors about Olivier Véran’s visit were fake news. For the president’s visit, it remains in the air, but not necessarily this week. It was a small guess that it would come up and run through people’s minds. It’s very, very uncertain. “

The prefecture has confirmed that no official visit is currently planned.