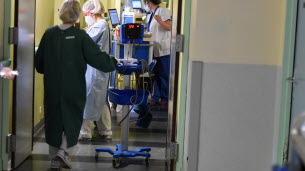 While the first wave of the Covid-19 epidemic had hit the Ile de France and Grand Est regions in particular in March-April, the second was intense in the Auvergne-Rhône-Alpes this autumn. A study from INSEE shows a sharp increase in the number of deaths in the region. Between 1 September and the end of December 2020, 8,500 extra deaths were registered compared with 2019 (1). Auvergne-Rhône-Alpes is the most affected region (+ 38%) ahead of Burgundy-Franche-Comté (+ 25%) and Guadeloupe (+ 23%).

A peak reached in early November

The excess mortality was highest in the weeks covering the period from 2 to 22 November (more than 2,500 weekly deaths, or almost twice as many as in 2019), a period that does not surprisingly correspond to the one identified as the peak of the second wave.

During the month of December, the weekly mortality rate in the region dropped to around 1800 deaths. Finally, in the last week of observation, from 21 to 27 December, the preliminary figures show a number of deaths that are still in decline (around 1600).

The infographic below shows that all departments are affected by this significant increase, with the notable exception of Cantal. A total of 30,869 deaths were registered between 1 September and 27 December in the region.

Those over 65 who are most affected