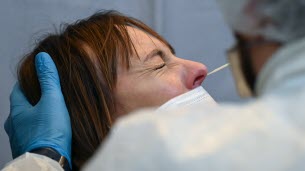 The number of countries and territories where the coronavirus variant was originally discovered in the UK has now been found, is 50, and it is 20 for the variant that was identified in South Africa, according to the World Health Organization (WHO).

The British variant in 50 countries and territories

SARS-CoV-2 is the virus that is responsible for Covid-19 disease. First reported to the WHO on December 14, the UK variant VOC 202012/01 has been found in 50 countries, territories and territories, the UN agency said.

The results of the tests show a distribution by age and sex that is similar to the other variants in circulation. Data from contact tracking reveals “greater transferability where the reference case is of the variant strain”.

The South African variety in 20 countries and territories

The South African identified variant 501Y.V2, which was first reported on December 18, has now been discovered in 20 countries, territories and territories.

“From preliminary and ongoing studies in South Africa, it is possible that the 501Y.V2 variant is more transmissible than the variants that previously circulated in South Africa,” the WHO said in its bulletin released Tuesday night. “Also, although this new variant does not appear to cause a more serious form of the disease, the rapid increase in the number of cases observed has put health care under pressure.”

The extent of the geographical spread of the two variants is probably underestimated, the WHO adds, due to a bias related to the fact that they were discovered in countries with genetic sequencing capacity for the virus.

A third Brazilian transition to Japan

At the same time, the WHO emphasizes that Japan was notified on 9 January of the discovery of a new variant in four people, two children and two adults, who arrived from Brazil on 2 January.

“This variant has 12 mutations of the spike protein, including three disruptive mutations that are common with VOC 202012/01 and 501Y.V2,” she explains, “which may affect transmissibility and immune response.”

The WHO adds that researchers in Brazil have reported the emergence of a similar variant that probably evolved independently of the one found in Japan.

For his part, the Brazilian researcher Felipe Naveca, who is collaborating with the Fiocruz Institute, said that the SARS-CoV-2 variant that was discovered in Japan was the result of a development of “a viral line from Brazil, which circulates in the Amazon.” called “B.1.1.28 (K417N / E484K / N501Y)”.

“The more SARS-CoV-2 virus spreads, the more likely it is to mutate,” the WHO said. “High levels of pollution mean we should expect more varieties to emerge.” “The extent and consequences of public health for these new varieties require further research,” the WHO insists.