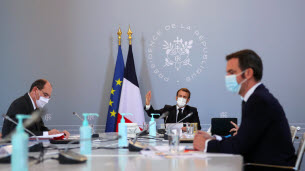 A new press conference by Jean Castex and Olivier Véran will be held on Thursday night. After rejecting the idea of ​​a re-containment last week to everyone’s surprise, can the Prime Minister go in the opposite direction? Now nothing seems impossible …

For a year now, the management of the Covid-19 crisis has occupied much of the agenda of Emmanuel Macron and the government, with a series of meetings being held mainly on the Elysee and could lead to announcements disrupting French life.

This is how management works in the midst of an epidemic:

This week, three thematic meetings were held in the Élysée under the chairmanship of Emmanuel Macron. Some have been repeated agreements. The first, which is regularly organized on Monday evening at 19.00, takes stock of the vaccination campaign: deliveries of doses, orders at European level, the effectiveness of available vaccines, use strategy and affected populations … Jean Castex participates regularly, Olivier Véran, Jérôme Salomon, Agnès Pannier-Runacher, Minister of Industry, and two campaign leaders: Alain Fischer and Marie-Paule Kieny.

This Tuesday, the head of state also discussed “the progress of therapeutic studies and treatments against the virus” with a dozen experts. In the process, it brought together the major French and European pharmaceutical players (including BioNTech, Pfizer, Moderna, AstraZeneca, Curevac or Valneva) to demand an acceleration in vaccine production. At the end, he invited himself to TF1 to ensure that production began in late February or early March on French soil, and that all French adults would be able to be vaccinated “by the end of the summer”.

Tuesday is also the day for the last chance for all ministers to influence the decisions made the next day in the Defense Council. In a video conference from 19:00 to 19:30 from the Pompéienne room or the blue salon in Matignon, Jean Castex listens, asks questions and tests all his ministers in their respective fields. On his side, government spokesman Gabriel Attal and Health Minister Olivier Véran. For this hour and a half of the meeting, the Prime Minister leads the agenda: closure of ski resorts, student situation, restrictions on shops …

On Wednesday morning, Jean Castex meets face-to-face at 8.45 with Emmanuel Macron and discusses the summary of the meetings the day before. A quarter of an hour later, the Covid Defense Council is held, which has become the president’s most important decision-making tool. It’s been about fifty a year. Convened by the Council of Ministers, it brings together all those whom the President considers useful for his decisions: ministers, experts, directors of central administration, advisers … It can gather from 10 to 40 people. The composition changes each time according to the topics addressed. Much more than in the Council of Ministers, with its rigid ritual, exchanges are generally direct and informal, especially since they are covered by defense secrecy.

The head of state has sometimes gathered two in the same week, including the weekend, in the event of a game-changing event or an urgent decision to be made. Like Friday when he decided not to limit again, contrary to what was expected.

Jean Castex: “The next few days will be crucial”

After the Defense Council and the Council of Ministers, Government Spokesman Gabriel Attal – and in front of him Sibeth Ndiaye – will carry out a balancing act during the press conference. Goal: not to reveal any of the planned measures while preparing the ground before the press conference of the Prime Minister the next day.

At the same time, a race against the clock of more than 24 hours begins: once the decisions have been made by the Defense Council, the Interministerial Crisis Center (CIC) takes over to translate them into decrees. This body, physically located on Place Beauvau, and headed by Jean Castex’s Chief of Staff, Nicolas Revel, brings together representatives of the various ministries affected by the measures to be taken. It is therefore up to the CIC to study the legal feasibility of the new provisions, with the sometimes insoluble question and the exceptions that follow from them. The first conclusions from the CIC allow late Wednesday afternoon to confirm the holding of a press conference on Thursday.

The coordination work between mediators and directors of ministerial cabinets then begins the night before Wednesday to Thursday to clarify each other’s messages and prepare answers to be given to the press. Sometimes it goes back and forth to the last minute before Jean Castex speaks at 6 p.m. The head of government is followed most of the time by Minister of Health Olivier Véran – this will be the case this Thursday night – but he may also involve other ministers or specialists. Within 1 hour to 1 hour and 30 minutes, the government announces many measures that disrupt the lives of the French.

It is often on Friday, or even on the weekends, that the measures decided on during the week take effect. As the second confinement, which came into force on the night of Friday 29. to Saturday, October 30th.

Zapping: these inclusions that have upset France

On Saturday, Jean Castex ends the week with a visit to the region, as he did in Tarbes on January 9, in Lyon on January 16, in Strasbourg on January 23 or in Brittany next Saturday. Travel where he does the service after-sales of his measures (vaccination, uncertainty, etc.), but also uses the opportunity to address regional issues that are close to him.