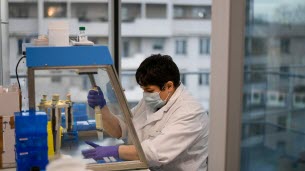 Given the difficulty of collecting data on the weekends, the hospital indicators have changed little with 922 patients admitted on Sunday 24 January (+) including 133 (+4) in intensive care.

During the last 24 hours, 10 new patients have been admitted to hospital and 6 new admissions have been made in intensive care. Four deaths have been recorded since Saturday, bringing the number of patients who have died in hospital since March 1 to 2,105. Since that date, 9,750 patients have returned home.