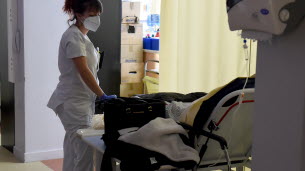 It is this week that we really measure the effect of this year’s celebration, Prime Minister Jean Castex recalled on Monday night at France 5.

Also at health institutions, the indicators observe a large increase: 932 patients were admitted on Monday, 24 more than on Friday after admission of 138 new patients in three days. In the intensive care unit, there were 135 patients after 33 new admissions since 15 January.

The number of deaths remains high with 37 patients transported by Covid-19 since Friday, leading to 2,040 patients who have died in hospital since March 1. Since that date, 9,543 patients have returned home (+100 since Friday).

This deterioration of indicators is taking place in the Rhône while, in its latest opinion, published on 15 January, the Scientific Council recommends, in addition to the national curfew at 18.00, “inclusion in certain regions or metropolitan areas with greater risk with a restriction of interregional travel “or” a modified containment of the same type that was put in place at the end of October “.