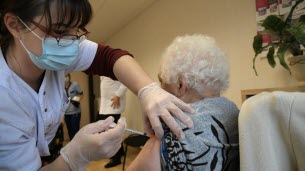 They are the main priorities in the vaccine plan against Covid-19 created by the government: residents of nursing homes have gradually received, since 27 December, the two doses of an anticovid vaccine. As of January 26, a month later, 271,000 of the more than 600,000 who had received at least the first injection, according to Brigitte Bourguignon, the delegate minister, were responsible for autonomy.

What percentage of the population received at least one initial injection in your ward? How many received the other?