Liquid, a cryptocurrency exchange based in Japan, was hit by a cyber-attack in which its warm wallets were hacked and $94 million in assets were stolen.

Deposits and withdrawals were forced to be halted by the exchange.

Liquid is one of the world’s most popular cryptocurrency-to-fiat trading services (based on daily traded spot volume).

This year, the exchange, which has over 800,000 customers from over 100 countries, has surpassed a daily trade volume of $1.1 billion.

When the crypto exchange became aware of the hack, it shifted its holdings to a cold wallet. 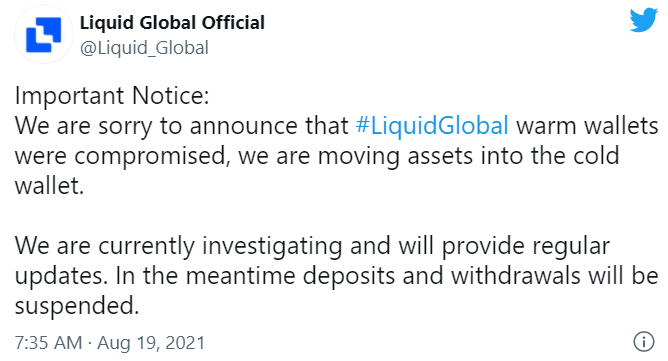 “We are currently investigating and will provide regular updates. In the meantime, deposits and withdrawals will be suspended,” the firm said.

The crypto exchange is investigating the attack and will offer updates on a regular basis.

For the time being, deposits and withdrawals have been halted.

Elliptic, a blockchain analytics firm, is assisting Liquid in tracing the stolen funds.

The hackers stole around $94 million in cryptocurrency assets in the hack, according to the firm.

The stolen money includes $45 million in Ethereum tokens, which are now being exchanged for ETH on DEXs like Uniswap and SushiSwap, according to Elliptic.

This aids the attackers in avoiding asset freezing, which is a possibility with several Ethereum tokens.

Hackers stole over $600 million worth of crypto from Poly Network