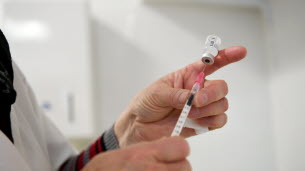 The Burgundy-Franche-Comté region announced on Thursday, January 28, the postponement of an agreement for a first injection of the vaccine against Covid-19 due to difficulties with the administration of Pfizer doses.

The Burgundy-Franche-Comté Regional Health Agency (ARS), for its part, warns that “some appointments made in February for an initial injection are likely to be postponed for a few days or weeks”. “No agreement will be canceled,” the agency said in a statement.

Online ordering of new appointments will again be possible “in the coming days”, she promises and says “to measure the legitimate impatience of candidates for vaccination”.

This “new regulation” of agreements is due to a “decline in supplies of Pfizer vaccines, which occurred this week and which will continue in February,” explains the Burgundian ARS.

However, the agency promises to “maintain a high vaccination momentum” thanks to “a new reception of more than 20,000 doses” of the second vaccine, from the company Moderna this time, preferably attributed to this region, the second most affected. In France by Covid-19.

Burgundy-Franche-Comté, the most vaccinated region on the French mainland

Burgundy-Franche-Comté is the most vaccinated region on the French mainland, with 73,413 inhabitants vaccinated on January 26, or 2.61% of the population, against a national average of 1.63%.

The CEO of this ARS, Pierre Pribile, had recently told AFP that the number of expected Pfizer doses this week was “20 to 25%” lower than expected.

“More than 15% of the Hauts-de-France priority population has already been able to benefit from the first injection of the vaccine,” ARS said.

Already last week, many appointments had to be canceled in several regions due to lack of doses and, according to the Minister of Health, a phenomenon of “overbooking” in some centers.