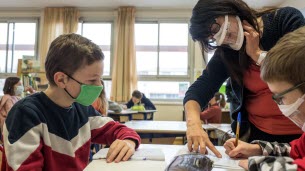 Thirty schools and one hundred classes “are currently closed,” it may increase slightly over the next few days “, but” we are not in a situation of explosion of infection “, said Tuesday morning about France info Minister of Education.

There we are on a kind of plateau

According to Jean-Michel Blanquer, we are currently observing “the same infection curve” as after the All Saints holiday: the curve has increased, “here we are on a kind of plateau, we must hope that it is like a bell”.

“No question” about closing schools

He reiterated that “at this stage” there was “no doubt” about closing the schools. “Of course I’m pragmatic,” he added, insisting “it would be the last thing to close” if the infection worsened. However, he acknowledged that due to the English variant, which is more contagious, there was a risk of getting more class or school closures in the next few days, as the decision to close by the health authorities could be made at. from a proven case and no longer three.

Apart from the “unforeseen explosion of cases”, the February holiday will last for two weeks and not three, he also indicated. The idea of ​​extending the winter holidays had recently been circulating to curb the epidemic.

“All my effort is to stick to the timelines,” “there is always some uncertainty. In 5 or 6 days we will have a clear idea of ​​the general trends,” Blanquer said. .

In addition, while the High Council of Public Health recommended avoiding certain masks in less filtering substances in the face of the circulation in France of the British variant, the Minister reminded that the masks given to education personnel are of category 1.

“The warning would rather be on the family side,” which equips its children, he said. “Maybe we’ll get to something mandatory after a few days,” Jean-Michel Blanquer added.