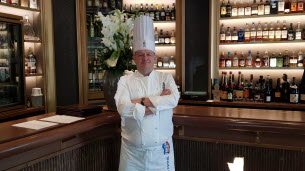 “I have a reliable but unofficial source that the bars and restaurants will not reopen until April 6. The government should definitely decide to announce the calendar and the real date of the reopening, “stressed Christophe Marguin, president of Toques Blanches Lyonnaises during an interview about the curfew at.

Why April 6? “Because we have to let the February holidays go, and especially the Easter weekend, which is a weekend when people move a lot from one region to another, will open their second home. These movements risk spreading the virus, explains Christophe Marguin.

A certain psychological tension among the chefs

And the president of Toques Blanches expresses his concern. – During our annual general meeting, which was held on Monday, I felt for the first time since the health crisis started a certain psychological tension among the chefs. Inactivity weighs them down because they are used to working in the morning, noon and evening. Our job is a very demanding job, and for several weeks we have been prevented from working, which in the long run is intolerable “. A situation that Christophe Marguin describes as “crazy things that morally undermine the entire industry despite the help”.

“Tell us the truth, confirm the date of April 6” asks the government, the president of Toques Blanches. This will make it possible to plan and organize, order the right products and develop seasonal menus. We can only hope that it is heard.