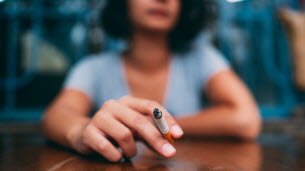 Every year in France, around a quarter of smokers try to quit for at least a week, which in most cases results in failure and resumption of smoking.

Santé Publique France (SPF) publishes in its first epidemiological barometer in January 2021 the results of the barometer, based on smoking data from 2017.

Why it matters. According to a MadeInVote survey for Kwit *, 47% of smokers consider quitting smoking in 2021 … but without much confidence in the success.

The core of the survey

– During a temporary stop, 42% chose the electronic cigarette, 26% for nicotine replacement (and even 56% for the most addicted). But a quarter did not use anything at all. And 17% say they were referring to … sweets.

– 82% of smokers (when they are not smokers themselves) consider it very important that the spouse quits smoking.

– Tobacco consumption irritates 7 out of 10 spouses: firstly because of health risks (77%), and because of the money spent (63%).

– One third of smokers will quit for financial reasons – the first motivation.

* Survey conducted online by Madeinvote for Kwit, conducted from 22 to 24 November 2020 with a sample of 1211 people representing French smokers over the age of 18, and 203 spouses of smokers (not self-smokers). Kwit offers a subscription of 10 euros per month for a method based on “benevolence”, thanks to the eponymous application. Which, according to the president and founder of Kwit, has already made it possible for “more than 500,000 smokers” to “quit smoking permanently”.

The figures from this study often match the data from Public Health France: according to the study, among smokers who want to quit, certain medical aids have been shown to be effective.

Nevertheless, some smokers have used other aids to quit, and in particular the electronic cigarette, the effectiveness of which is still debated to this day.

During their last attempt to quit in the two years prior to the survey, 14.8% of smokers or former smokers stated that they had used an electronic cigarette without nicotine replacement therapy (NER), 11.7% of NER without electronic cigarettes, and 2.8% both. Finally, 1.6% a drug (other than TNS) prescribed by a doctor.

No help for two thirds of the stops

But above all … seven out of ten stated that they had not used any help among those mentioned.

The study from Public Health France shows that among smokers who were questioned in 2017 who made their last attempt to quit between January 2015 and September 2016 (before the first edition of “Tobacco Free Month”), the majority did not use any help. to quit smoking. About one in three say that they have used an aid outside, the most used aids are electronic cigarettes and NER, in relatively equal proportions.

Regarding the connections observed with the various studies, smoking cessation was associated with the use of electronic cigarettes, combined or not with NRT, only among men who had already made at least one previous attempt to quit.

When the electronic cigarette takes over permanently

This was not the case among men who had not made previous attempts, nor among women.

Use of TNS without an electronic cigarette did not appear to be associated with quitting smoking in the study beyond six months.

The use of electronic cigarettes can last for several months, even years (an average of 20 months among the users surveyed in this survey); it is then used as a tobacco substitute and addiction management tool.

Conversely, the average duration of use of drug treatments is currently estimated at one month.

In addition, the observed results are based on a relatively short duration of quitting (more than six months, but less than two years) and do not suggest a subsequent resumption of smoking.

Better knowledge of the dangers of tobacco

People under the age of 65 and people with a high level of education had better knowledge about the connection between tobacco and cardiovascular disease, and especially about the quantity and duration threshold for being considered “at risk”.