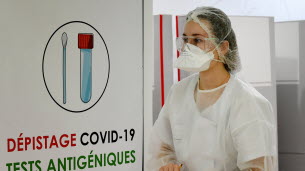 Will Christmas parties and their family reunions play a crucial role in the development of the Covid-19 epidemic? It is still too early to translate any impact on the figures, in our departments and across the country. The latest weekly epidemiological bulletin, published on 31 December for the Auvergne-Rhône-Alpes region, examines the indicators for the week of 21 to 27 December and summarizes data (hospitalization, resuscitation, incidence …) “slightly down while staying on a high level “.

The hospitalization curve in the Loire, Rhône, Haute-Loire and Ain, completed in our infographic with the latest available data up to 4 January, thus shows the plateau on which the four wards have been installed for several days (even weeks for the Haute-Loire) . The Legal Department, located in Burgundy-Franche-Comté, is an exception with a deterioration of the indicators that are important enough to be placed since 2 January under an early curfew at 18.00 (read below).

The finding is similar for people admitted to the intensive care unit, with stability or a slight decrease in admissions. At the regional level, on 30 December, 401 people were admitted to the intensive care unit of the 4,216 people who were admitted. The number of new admissions and new intensive admissions was reduced during the week of 21 to 27 December (-14% and -9%, respectively). However, the region is far from starting: it was hit hard by the second wave, and the weekly hospital content of Covid-19 patients (14.6 / 100,000) is still above national speed (11.5 / 100,000).

The decline in the number of new deaths related to Covid-19 is finally continuing in health care institutions. 261 deaths were registered in hospitals between 21 and 27 December, a decrease of 18% compared to last week. A figure that does not make us forget that significant excess mortality has been observed in the region for 14 consecutive weeks now. Public Health France also specifies that 67% of people who died in hospital were 80 years or older.

The other epidemiological indicators, namely the test’s positivity rate and incidence (number of new cases detected over a week per 100,000 inhabitants) are more difficult to interpret. In fact, the figures for the end of the year are still marked by the huge screening campaign initiated by the Auvergne-Rhône-Alpes region in December. This makes comparisons difficult since the number of tests increased drastically during the period with many “candidates” for screening, mostly asymptomatic and present to calm down at Christmas time.

The law in a bad note

The situation is much more critical in Jura. As of December 31, the occurrence of the department (310.6 over 7 rolling days) reached a record level and approached the highest speed in France (330.2 in the Alpes-Maritimes). It is also one of the 15 wards that have been placed under a reinforced curfew (advanced to 18:00 instead of 20:00) since 2 January.

The story is no more encouraging regarding the test’s positivity: it stood at 6.4% for the week of 21 to 27 December, the highest figure for a Burgundy-Franche-Comté region which, as a whole, is experiencing a very unfavorable development in the epidemic.