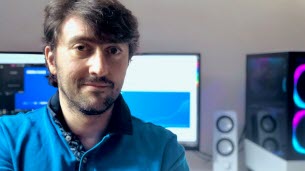 “I created the site quite late, when I became interested in what happened very early. In fact, from January, because when a country like China stops everything, it is inevitably a problem, ”Guillaume Saint-Quentin recalls. Without making it rain or shine in the face of an unpredictable virus, the digital project manager tried to make sense of the situation he was exposed to by seizing public data.

Finding potential signs of recovery was another of his motivations. “It was the end of the first containment. We knew it was going to start again, but we did not know when ”.

“The virus works in a very localized way”

From a job done for himself and a few relatives, followed by posts on twitter, Guillaume Saint-Quentin became involved, until he launched his website. “I quickly noticed that the virus works in a very localized way. In the beginning it was in France the Grand Est, then the Auvergne Rhône-Alpes. Right now, for example in England, it’s around London. The situations are very different, also in regions and departments. Want to inform about a local situation, that was what gave me the idea of ​​making maps ”. Be Covid was born.

Be simple and popularize the data

Among these variations, the Trouillometer and TrouilloCarte give via emojis a welcome lightness to a reality that is smaller. “I was not trying to create humor, but to be simple and popularize the data,” specifies the founder of the site meteo-covid.com.

A website that provides access to all indicators of the epidemic, via graphs and maps. Everything is there by region and department: new cases, number of hospital admissions, people in intensive care, deaths, incidence, positivity, vaccination monitoring … Including recent variations in the number of cases over 7 days.

“Looking at other countries allows you to predict”

“I work in digital. I know the data. I am used to reading them, analyzing them, but I have no computer training, says Guillaume Saint-Quentin, who admits to having gained a lot of competence. That which already provides food for other projects.

In the meantime, because the father of a family working at Keolis is short of time, he is joined in his non-profit organization by Fabien Lascols, a speech expert, who is responsible for developing the analysis section and international data. “We realize that there are areas in Europe or in the world that operate with development that is similar to what we know. Looking at other countries allows us to predict ”.